A road trip through the US of A - Part V: New York City, NY

When we realized, that we were about to enter New York City by car I became a bit emotional. No clue why, but somehow I never dared dreaming about that. I don't even know why this should be a big deal for me. I have visited that place twice already. The first time with my dearest Mimi - we had 24 hours in this spectacular place - the second time I went there by myself. Now it was the third time. Well, 'murica is magic and weird and has strange influences on people, obviously I am no exception at all.

We entered the city from the west, through New Jersey and entered Manhattan by the George Washington Bridge, as our goal was Uptown Manhattan. We planned to stay with our former flat mate Eduardo, who lives next to Colombia University. You wouldn't believe it, but we immediately found a free parking spot, where we could leave our car for the whole week, for no money, right in front of Edu's house. All we had to do was move it when they planned to clean the street, twice that week. We were soooo lucky!

We didn't need the car at all, as public transportation is the only way to get around in New York. Yes, you could take a Taxi. But they're crazy expensive and the streets are constantly clogged anyway. So we took the Metro anywhere we wanted to go. Sure we made the crucial sight seeing tour, as it was Fabs' first time in the big apple. Most important spots in my point of view:

Brooklyn Heights
From Colombia University you get there in 34 min. By a mix of Line 1 and 2 or 3, it is super easy and quick. And you get the perfect view on Manhattan from there. Actually the best. Ever. And the brick houses, like in the movies. And the cafés. And... Well, go there and see yourself!

Statue of Liberty
Well, you have to see it. But you shouldn't book an expensive trip. The best way to see it is to take the free ferry to Staten Island. It passes by the Statue of Liberty and gives you a fantastic sight on her, but also on Manhattan. Again. But you can't see enough of it. Well, I can't.

Museums
Well, we all know they're expensive and boring. Well, except for most of those in New York. Because the prices are only suggestions. So if they suggest an entrance fee of 24 USD, you can also pay just one. Or 50 cents. Because you can. And it is okay. Well, sure, it is better if you pay more, but well, not everybody can pay such a lot of money for every single museum. And I think it is crucial to get cultural education. They have an incredible amount of treasures from all over history and the world. So it is only fair if everybody has a chance to look at it, right? We went to the Metropolitan Museum (enough to see for a week) and to the Museum of New York City. That was enough, as we went to some of the free museums (Smithonians) in Washington D.C. already.

Central Park
Run through Central Park. Everybody does it, and there are good reasons for it. One of them is that in the US you can never really walk anywhere. The streets are simply not made for it and the culture is absolutely anti-pedestrian. So once you have the chance to move your legs, do it and enjoy it in this spectacularly beautiful huge garden.

Times Square and around
Well, it is part of the deal and of the American dream and stuff. So if you go to New York, go and see that. If you must, have a Burger at Planet Hollywood. I did with Mimi, and we had a blast. It is probably the most stereotype american thing you can get. 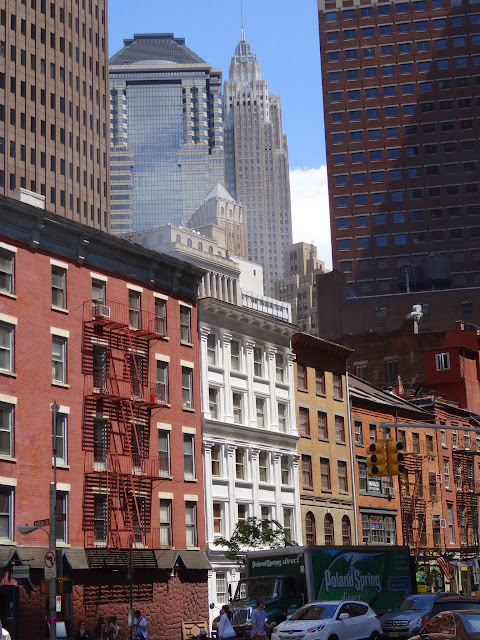 Stroll
Yes I said it is impossible to walk around. If you have time, Manhattan offers one of the extremely rare chances to do it anyway. It is super crowded and you don't get anywhere, but you should do it to discover the huge variety of neighbourhoods there are.

So much for New York City. I'll leave the rest up to you to discover. There is no real "off the beaten track" left, it is New York. But sometimes that is very okay. I love it and I hate it - just like everybody else. After we did all we wanted and needed and we even met my favorite Professor, Kose John, for dinner, we moved on. Another time in New York, that I will always remember.