A road trip through the US of A - Part I: Los Angeles CA - Austin TX

After more than 18 months in South East Asia, it was time to leave. With a lot of good memories, we boarded our flight to China and onwards to Los Angeles. A long trip, an even longer flight across the Pacific Ocean and the date line, back into the Western world.

We tried for a few weeks before flying to the US, but finding a couch to surf seems to be a very difficult thing in Los Angeles. Finally, on our last day in Kuala Lumpur, we gave in and booked our first stay with AirBnb. As we booked last second, we had to take what we could get (most of the other potential hosts didn't reply within 24 hours). We were not really thrilled to pay to sleep in someones living room, but still better than sleeping on Hollywood boulevard. We were happy to arrive at our hosts place in West Los Angeles, just off Santa Monica boulevard. The hosts were nice, the appartment as well and soon we were off to a well deserved night of sleep. 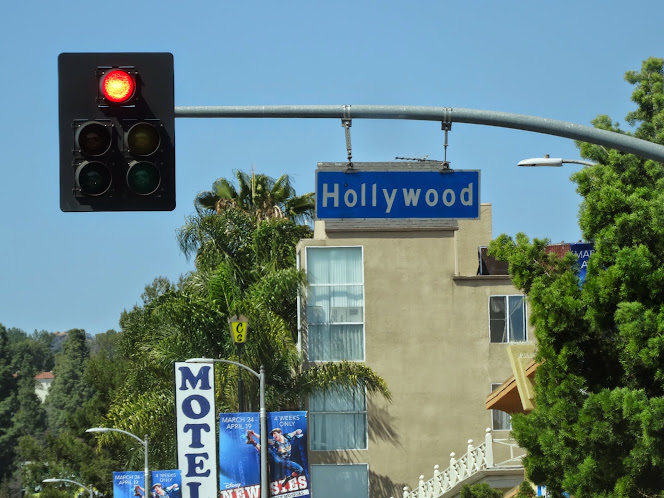 The next day, we took our first stroll around our neighborhood in LA. We were, to be honest, quite shocked. First, because the US and even more so California, are expensive compared to South East Asia. But secondly, LA is nothing nice. It felt, in large parts, like any big city in South East Asia: polluted, crumbling, shabby. In the evening, we were invited by a couchsurfer who couldn't host us. Meeting Nagat and her family was like finding an oasis in the middle of the desert. They were so nice and we were happy to spend the evening with them, talking about travelling and playing with the kids while sampling delicious palestinian food.

The next morning it was finally Monday. So we could pick up our camper van for the next three months. Excited, we took the bus downtown and then another one to reach the office of Wicked Campers in Gardena. As booking and payment by credit card had worked fine, we were soon off with our home on wheels!

Our first destination was Las Vegas. We had decided beforehand, that we wanted to take two days to drive to Vegas through Death Valley. First, we drove to the next petrol station, to fill our tank. Second, we went to the next supermarket, to buy groceries for the next few days. And 200$ were gone. After more than a year in Asia, it took a while to get used to Western prices again. We left LA through Hollywood. Lucky us, we had been warned before. Hollywood is a rather run-down district of LA and the walk of fame is nothing spectacular either. But we had fun watching all the disappointed tourists in their best change of clothes.

Getting out of the big city during afternoon rush hour wasn't the most pleasant thing, but once we left Palmdale and Lancaster we were finally on the open road with little traffic running through dry valleys. We occasionally grew tired and finally stopped at a rest area where we spent our first night of many in our cozy van. We didn't exactly know if this is legal, so we were a bit nervous at first, but the longer the night lasted, the more cars turned up and stayed for the night.

The next morning, we enjoyed a great breakfast of granola with fruits before hitting the road again. The scenery through the mountains and Death Valley was amazing. Just browsing through our pictures makes me wanna go there again! As we underestimated the distance, it was already late afternoon when we reached Vegas. And the sun disappeared as one of the few yearly sandstorms was about to hit the city. We were happy to soon reach our host Stan in Henderson, just outside Vegas, so we could sleep in a bed instead of our car.

Stan is as American as you can possibly imagine. Strong western US accent, cowboy boots, big belt buckle, an even bigger pickup and he's working as engineer at the Hoover Dam. So the next morning we could simply follow him to visit this impressive monument of modern engineering. Overlooking Lake Mead both from the Nevada and the Arizona side of the dam we could see the consequences of four years of draught in the Western US. Lisa insisted on going to the strip, so we spent a few hours there, walking around and looking at the artificial facade of the American dream turned horror show. At least that's how I like to call it.

Our next destination was more to my liking. We headed North-East an soon reached Utah. We stocked up on money and groceries, enjoyed a delicious wood-oven pizza on the roadside and headed off to discover beautiful and amazing Zion National Park. Driving through the park and the landscapes around it we knew we would have to come back later to explore this area again. Maybe 2016 or 2017? Too soon, we left the park again, as we wanted to reach Gran Canyon the next day. We stopped somewhere along the road on a small parking lot to sleep, next to some of those huge RVs you see everywhere in the US. Our neighbors, Jerry and Lisa (what a coincidence!) invited us over for coffee after dinner. As temperatures dropped below freezing during the night, we gladly accepted.

The next day, we drove finally to Gran Canyon. Yes, it's touristy. Yes, it's big. And yes, it's very worth going, despite the amount of tourists you'll meet there (even though it was only April and snowing a bit along the south rim). Even with clouds, the canyon is simply stunning. Even more once the sun cracks through the clouds. Next time though, we'll go hiking down the canyon and further into the backcountry.

After this amazing sight, we drove down to Flagstaff and finally slept on a Walmart parking lot, again surrounded by many huge RVs. The next day, in the afternoon, we reached Albuquerque, where we had found some nice couchsurfing hosts. So we got a shower at last, delicious vegan food, great company and a good nights sleep in a real bed. And we made a typical rookie mistake. We forgot to bring Lisas ID when going to a bar for some craft beer...

The next day we had to move on, as we wanted to reach Austin, TX three days later. Our hosts convinced us of making a detour to Santa Fe. The drive through the mountains wasn't that spectacular (we're from Switzerland after all), but Santa Fe was nice. And covered in snow! Altitude (the city is at 7000ft.) does matter, as we had to learn again. We continued south towards Texas. Coming to the US, we of course brought a few stereotypes with us. Some of them got confirmed (e.g. huge cars) but some not. And we definitely didn't expect Texas to be so green! But coming from dry and cold Arizona and New Mexico, Texas was a state of lush green fields and flowers to us. After a short night in Lubbock, we drove to Abilene, on seemingly endless backroads.

Abilene is a very Texan city. Plenty of steakhouses and a christian university. Our hosts, a mexican-japanese couple with their adorable girls, lived just next to the university and showed us around. And in the evening, we of course had to go to a steakhouse and eat a real steak. In New Mexico we had to have a chili, in Texas a steak. We loved sampling the local cuisine. A day later we finally arrived in Austin, the first destination on our US road trip where we had friends to visit.

More pictures of our road trip between Los Angeles, CA and Austin, TX