Mui Ne - where Russia goes for a holiday

Pelmeni, Shashlyk or Pirozhki for breakfast? You can get it all in Mui Ne. Everything is written in Russian, sometimes in Vietnamese too. And if you're lucky, you get an English translation. Most of the waiters in restaurants seem to speak Russian, English speaking staff was hard to find. I guess that says enough about the culture and prices in Mui Ne.

We arrived after a 22 hour instead of 17 hour bus ride on Christmas. When we spotted our hotel we asked the driver to stop, that was possible everywhere else so far. We rather had to fight to stay on the bus until we arrived at our destination on former trips. This time it was different. The driver didn't stop until we passed our hotel by nearly four kilometers. Well, all the hotels were behind us, but a lot of taxis waiting outside the bus already. Guess what, as usual they had a deal to make all the tourists pay for extremely high rates and the bus driver gets a share of the huge profit. What could you do? Nothing. It is part of traveling in SEA, in Vietnam it is your main experience pretty much...
Lucky we arrived in perfect company of our dear friends from London whom we met over and over again on our trip through Laos and Vietnam. So everything was not half as bad and we could even share a taxi, so it was a lot cheaper. We agreed on taking a taxi to their hotel and then walk the rest as they were supposed to be only 500 meters apart from each other. When they named their hotel to a driver it was very easy to bargain the price a little down and off we went.

We arrived very soon - quite a bit too soon - but we trusted all the others that this would be right. So we paid, got off and started walking. But we walked for quite a bit and wondered how our hotel could be that far away. That was more than 500 meters, well, the GPS showed us how much more: we got off the taxi way too early. There were several hotels with the same name, the taxi driver brought us to the closest and we had to walk a good three kilometers to our place. A little pissed we already made a plan to tell the others that we could meet at our place in the evening and that it seemed a little further than 500 meters to walk with all our luggage... but we did meet the others later and shared the same story. They also walked the entire way with their luggage, we ended up laughing about the story and being next door neighbors again. So it all ended very well once more.

We stayed at Saigon Cafe, a family run guesthouse. We got the best room with perfect view over the beach to see spectacular sunsets every evening. It was a rather spacious room with shower and fridge, the owner was lovely and caring. We rented a motorbike for 6 USD (5 EUR) per day to discover the area. It is the easiest way to get around and probably the cheapest too, as long as you don't have to bribe a police officer. But more about that later.

When we decided to discover the dunes together with our friends we drove along the main street on our bikes. People we met during our journey all warned us that the police in Vietnam is terrible and costs a lot of bribe money, so you really shouldn't stop when they wave you out - you should just speed up and go. Well, we tried. The first time they waved at us I sped up and off we were. That went well for once. But on the way back they recognized us, well, not too many blond ladies drive with a really tall guy on their back seat. So when they saw us coming, we sped up again. But one of them just hopped on his bike, drove by and forced us to stop. I started sweating, tried not to panic.

The guy in uniform started shouting at me why I didn't stop. We argued a while, I tried to stay clear and polite. He freaked out, took our friend's motorbike key and drove off. Now our friends started to be really afraid. We tried to calm them down. Our time in Indonesia and the rest of SEA paid off. We stayed calm and waited. When the uniformed guy reappeared he brought a friend. Really angry, the guy ordered his friend to take our friends motorbike. We wanted to know where they'd bring it and how we'd get it back. They "suddenly" "couldn't understand us". So we blocked their way. As long as we didn't know how this would end or where we would get back the bike we couldn't let them go. Our friends had to leave early the next morning for Saigon, and we really didn't want to spend the rest of our time in Mui Ne looking for their motorbike. So Fabs blocked the way of our friends motorbike, I tried to ask the guys what the plan was, our London ladies supported us. The uniformed guys got angrier and angrier.

As we quit smoking a couple of days before, we couldn't offer bribe money in a cigarette package. We asked how much they'd want, but that didn't help. Us ladies tried to get back the key, we were fighting physically with the uniformed guy's friend and I still tried to figure out what they really wanted. As this all led to nothing and the situation got really bad the only way out in my opinion was to ask their identification to make sure that we could tell who they were if we'd find anybody who might care about it. As soon as the identification question was out I saw fear in their eyes and they got very insecure. So I ordered all the others to take their cellphones out (mine was broken) and to take pictures of their faces and their ID tags. That was extremely efficient. They freaked out, ripped off the number plate of our friends motorbike and drove off.

What a relieve. They were gone. And we had the bike. The thing with the number plate would be solvable. So we drove back to the village. We went to their hotel to hand back the motorbike with them and be supportive. When the lady who gave them the bike arrived she was smiling. It was definitely not the first time something like this happened. It cost our friend 300'000 VND (15 EUR) and a hell lot of nerves, but we were all fine. The "police man" was gone and we never saw him again. Beware of police everywhere around here, especially in Vietnam! 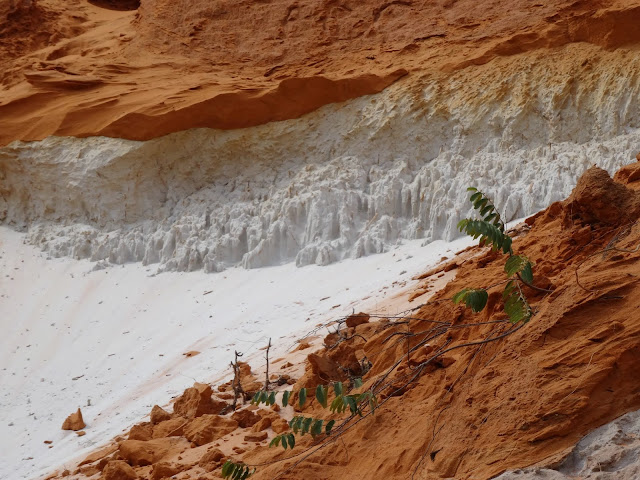 After that everything went smooth. We sent our friends off the next morning, hoping we'd see them again in Saigon. Feeling a little lonely we went back to our standard restaurant. We discovered it on the first day. They sell amazing food for reasonable prices, they're super friendly and somehow all the German and Swiss people along with some English speakers ate there. We tried a couple of other restaurants, but this was the best one by far. And it didn't take long until we started a conversation with a German couple. Hahaha, again. And another really awesome time with great people started.

It was shortly before New Years Eve and we had no plan yet. As we got tons of handout in Russian promising us to spend the best NYE ever, we decided to definitely not go to any club but spend it with our new friends on the beach. Those we met later who spend this night in one of the clubs said they had no champagne at midnight and paid an incredible entrance fee.

While waiting for our food that evening another Swiss couple joined our table and we really had one of the best NYE in a very long time. We enjoyed this perfect company for such an event and had great fun. Thanks you guys again!

Everybody left us again the next morning. We were incredibly happy that we didn't have to go anywhere at all. So we spent a day in bed, hung over and out and enjoyed doing sweet nothing before our trip to Saigon the next day.