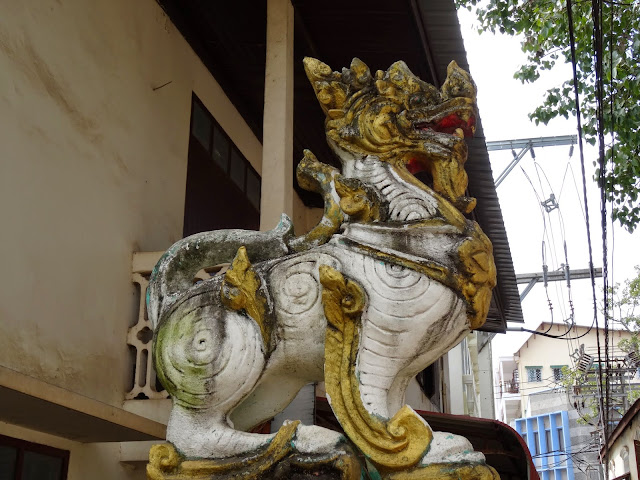 Time was running out and the street between Phnom Phen and Laos apparently was under construction, so we decided to take a flight from Phnom Phen to Vientiane. That means that we skipped the 4000 Islands, but it also saved us a good 30 hours of bus rides.

The arrival in Laos was smooth, as Swiss people get two weeks in Laos without visa. We resisted to jump into an official Taxi that would have cost us quite a bit and so we walked towards the gate of the airport. Half way out suddenly a Taxi that we refused to take before approached us and asked what we would like to pay. We named the price Fabs and I agreed on before and the guy immediately said yes. In a hurry he put our backpacks into the trunk, hid the Taxi sign from the roof and we drove off. Not really legal but a lot cheaper and maybe the last chance for him to get customers that day, as it was already rather late.

We arrived in our first hotel outside the tourist area. It was pretty shabby and smelly. As we booked it for one night we decided to stay and check out the area to switch hotel the next day. While looking for dinner we discovered a very nice hotel. They had one room left and promised us to keep it until 8am the next day. Happy about that we enjoyed our noodle food on a street stall twice as much.

So we moved to the new hotel, to a pretty room, and we were incredibly happy. Staying in a nice hotel helps a lot to enjoy a place. Soon we had a not so nice wake up though. The toilet flushed back, so you had to be very careful not to get a surprise shower from the drains and the noise of some electric installment was incredibly loud during the night.

When we walked through the city the next day we discovered that there would have been many really beautiful hotels just around the corner. Making the best out of our short stop in Vientiane we decided to at least enjoy the food to the fullest. That is easy. Lots of bakeries, baguette sellers, cafes and local restaurants make it a pleasure to eat delicious food.

Friends told us later that you can stay in Vientiane way longer and experience great things if you leave the city for day trips. We haven't seen anything like that, that is why we decided to move on to Vang Vieng very soon already. Leaving the small but pretty capital city with its expensive cars to discover the nature up north. And we were happy with that decision.

Not so happy was our booking of the bus. We heard that it is between 40'000-60'000 LAK and settled for the maximum price a little to fast in our hotel. In the tourist area we discovered afterwards that all the usual offers really were on 40'000 LAK. The pick up already took more than one hour, even thought the bus was waiting only two streets from our hotel. Taking off from the city also took way too long and we arrived in Vang Vieng about two hours later than planned. But well, the landscape was incredibly beautiful and the journey makes the trip, right?