One city, one market - Mandalay

After our fist impressions of Myanmar in Yangon we boarded a bus to Mandalay. We didn't know what to expect as already Yangon was very different to what we tought it would be like. Hopping off the bus at the terminal in Mandalay, immediately ten taxi drivers gathered around us to make business. As usual we insisted on getting our luggage first and then to deal with bargaining about the price. We heard the offer or 10'000 MMK (8 EUR), so we set our goal to 6'000 MMK (5 EUR), as the distance on the map looked about the same or a little shorter than from central Yangon to the bus terminal. 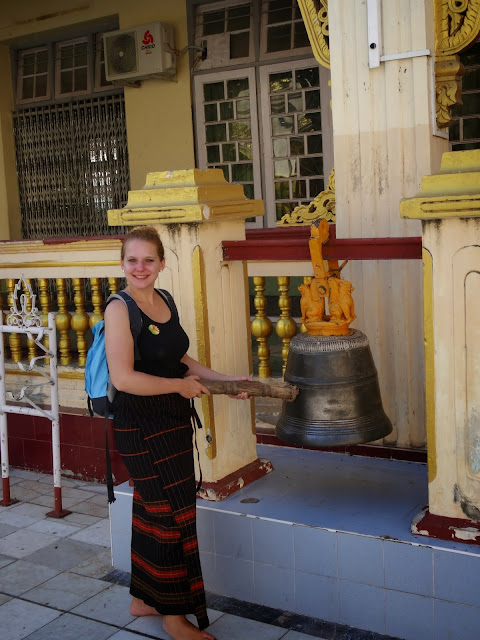 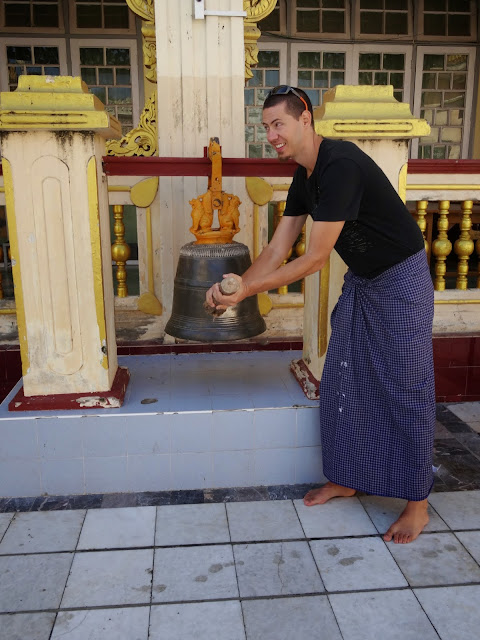 Walking with our luggage towards the exit of the terminal, the offers dropped quickly and the third driver accepted the deal. We felt like paying a little more than necessary as it was a little too easy and the distance really was a little shorter than we expected, but we agreed and so that's what we got.

We got off where the driver promised us to find a lot ot hotels. The first four hotels looked very shabby, not worth the price of 25 USD (20 EUR) the hotels asked for at all. Dirty, smelling like cold smoke, dark, only twin beds, we decided to look further even though we were incredibly tired after our more than twelfe hours journey in the bus.

Then we found the Mahar Hotel, that made a bit a better impression. We carried our luggage to the sixth floor and even though the room was still not great at all we decided to just take it and look for something better online. As all the booking websites were not too promising we checked the Lonely Planet website, sometimes they have useful hints. They suggested the Rich Queen Hotel, and as soon as we caught up with a little sleep we strolled through the city and included a visit at Rich Queen to check if they have rooms available. They told us to call again the next morning as they were fully booked that day.

Waiting for the next morning was hard, as the Rich Queen really looked promising and we hoped so much to get a room there. If you live in a bad hotel room the entire city seems to be a mess and for me it is hard to like a place in that situation.

Even though the streets of Mandalay are logically numbered and arranged in squares it all looked terribly chaotic at first sight. Most of the streets are not paved, thousands of motorbikes, becaks, cars, handcarts and other vehicles kept the streets busy, dust everywhere and different smells of what ever lays around.

The next morning we called the Rich Queen and received the wonderful news that they have a room for us. We grabbed all our stuff, threw it in our back packs and ran through half the city, scared that they might give our room to someone else, like they did in Ternate before. But we were lucky and got a clean, big, bright room in this fabulous place.

Knowing that we had a beautiful home with a working shower we freshened up and decided to give the city another shot. We found orientation quickly and the vivid spectacle suddenly became interesting and fascinating. Delicious and cheap street food, fresh products on the market (which seems to cover about 3/4 of the city), beautiful lovely people everywhere and behind triangled walls you could even see people taking a bath in public. You could find clay pots throughout Myanmar, standing on every street corner. It took us a while to figure out that these are public water containers, ready for everyone to drink fresh water out of it, using the same shared cup.

Burmese people seem to share everything everywhere anyway, that's pretty cool. And not only amongst themselves. They seem to live in one huge community and you're suddenly part of it. That is an amazing experience. As we did not speek Burmese though, we sticked to the foreign guests, which also was a blast. The tourists who stayed at the Rich Queen Hotel (pretty much all of the backpackers who travel through Mandalay) were very laid back and easy going. We talked for longer to three different groups of people, with others we had shorter encounters. That was a really wonderful experience.

We were extremely lucky with our company for the day tour we booked. We just told the reception that we would like to rent a taxi for four with others and they matched us with another couple from the Netherlands and Germany. A perfect choice. They were really great and we did not only spend a beautiful day discovering tons of Pagodas together, but they also continued their journey to Bagan afterwards, were we joined them for dinner in the evenings. We were really thankful for that.

Already in Thailand we met an awesome couple, then in Mandalay again. For us it was a weird concept of couples hanging out together as it can very quickly turn into a competition of who is more in love or who is cuter or what ever crap. So we tried to stay out of couple meetings our entire relationship long if we didn't know exactly that we'll be fine. But suddenly we met two of them in a row and it was just wonderful. We heard very interesting stories, it was just perfect to exchange experiences but also to talk about life, the universe and everything. Another great new experience that enriched our journey. Did we really have to travel to the end of the world to figure that out?