After an amazing three weeks with friends and families, Lisa and I were thrilled to start the next part of our trip. Everything went smooth and we safely arrived back in sunshine and hot weather. Unlike most travelers, we took a taxi from the „new“ airport, as our CouchSurfing host lived quite on the edge of Bangkok. About 1.5 hours from the city center. But this was what we were looking for. A quiet neighborhood, far from the touristy Khao-San-Road and the hyperactive Sukhumvit. We spent the first two days relaxing, getting to know the Thai culture and curing Lisa's cold.


As we already had a flight to Myanmar booked for four weeks later, we went to the embassy of Myanmar to apply for a visa. We arrived there before 10am (the embassy opens at 9am) to find a queue coming not only out of the visa section but at least 50 meters down the street. Probably because the embassy had been closed the previous day due to a public holiday. The guy running the coffee shop next to the embassy gave us the visa application forms and we started to stand in line. It was hot and exhausting, but finally, after four hours, we could apply.

Most people get their visa for Myanmar either the same day or the following day. Apparently they didn't like something about my application, so we had to wait a full week (five working days) for ours. We were quite unhappy having to stay a full week in Bangkok, but you can't really argue with consular staff. In the end, they will decide if you're allowed to enter their country or not. We had no other choice than to accept the verdict.

Next we finally wanted to see our friend Massimo. The only thing he told us once we contacted him after arriving in Bangkok was that we should visit him in the hospital. What's the matter, we were wondering, hoping that nothing bad happened. When we arrived, his room was empty. But soon Bert showed up, breaking us the terrible news. The doctors found some masses in his lungs and by now could only confirm that it was lung cancer! Fuck, shit! Live sometimes throws the worst shit at you. But Massimo didn't seem that depressed when once he showed up in his room. At least he had friends around him, the best company you could wish for in such a situation. We spent the next two days exploring Minburi and Central Bangkok in the morning and visiting Massimo in the hospital in the afternoon and evening. We also enjoyed hanging out with Bert around Sukhumvit where the hospital was located. Sukhumvit is a lively area with plenty of bars, restaurants and nightclubs, including many with ladyboy shows. 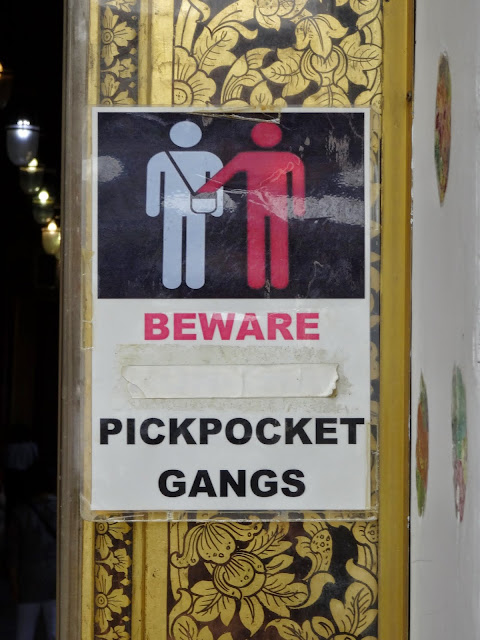 By Saturday we had moved from Minburi to the Khao-San-Road, the most touristy part of Bangkok. We went to the hospital again, where Massimo told us that he would be released within the next two hours, go home and pack and fly to Italy the next evening. At least things looked like moving. We of course joined him for an evening over beer and snacks at home and a last Bangkok lunch the next day.

With Massimo gone and Bert on his way to Krabi, we started exploring Bangkok for real the next morning. We stayed in Universe@home, a quite new guesthouse on the main road just next to Khao-San-Road. The Khao-San area is the tourist mecca in Bangkok. The streets are full of restaurants, bars, food stalls and shops selling you all the unnecessary things backpackers seem to look for. It's also the best place to buy tickets to other places in Thailand. We paid 600 THB (15 EUR) for a comfortable room with private bathroom and AC. Most places around Khao-San aren't cheaper than that, unless you're willing to stay in a dorm with fan only and shared bathroom. For food, we can strongly recommend the various street food stalls offering cheap pad thai (30-50 THB/0.8-1.2 EUR) and other Thai favorites like tom yum (50-100 THB/1.2 to 2.5 EUR) as well as a nice Israeli restaurant called Shoshana with delicious Middle Eastern food.

We bought a Thai SIM card for our further travels in Thailand. You can buy them at every 7/11, but if you want to use internet on your cellphone, you rather buy one in the shop of one of the phone operators as they can offer you cheap package deals (200 THB/5 EUR for 1GB for one month).

Getting around in Bangkok is fairly easy. If you're close to a BTS or MRT station, these urban trains bring you to your destination comfortably and fast. Buses are a bit more tricky, as you have to know where they're going before boarding. But conductors can usually tell you which bus to take if you're completely lost or on the wrong bus. Taxis are cheap and competitive, as long as you stick to metered taxis (always insist on using the meter) and occasionally check on google maps that the driver is going the right way. The basic fare is 35 THB (less than 1 EUR) and a typical trip from Khao-San to Sukhumvit shouldn't cost more than 100 THB (2.5 EUR).

Among the many temples and palaces Bangkok has to offer we visited only two. Majestic Wat Pho, one of the biggest temple complexes just next to the royal palace featuring many highly picturesque pagodas and a plethora of Buddha statues (admission fee was 100 THB or 2.5 EUR, though this might increase to 200 THB/5 EUR in the near future). We skipped the royal palace as the admission fee is a whopping 500 THB (12.5 EUR). Instead, we took the ferry across the river (3 THB/less than 0.1 EUR) less than a block from Wat Pho to Wat Arun. This temple or wat seemed a bit more Hindu inspired to us.


All in all, we had a very nice time in Bangkok and loved the soft introduction to Thailand and Thai culture it gave us. We had no problem spending more than a whole week in the city, even though if you have the choice, we'd rather recommend you to stay four or five days as Thailand has many more things to offer than its impressive capital.