Skip to main content
Labels
Posted by Fabian Dreher May 03, 2014

Welcoming friends in Indonesia (part one)

We didn't plan this much in advance. In the beginning of April I was just recovering from Chikungunya. Manu, a dear Swiss friend of ours currently working at the Swiss embassy in Beijing, announced that she planned to meet some friends on Bali and would like to visit us in central Java. We were of course thrilled to see her, as she was one of our closest friends back in Switzerland. Even though Lisa and I are both happy to be away from Europe, we often miss our friends.


She booked her flight to Yogyakarta - as there are no direct flights between Solo and Denpasar - we exchanged ideas about what to do on Skype and on 22 April early in the morning I drove to Yogya airport to pick her up. Indonesian traffic is often a nightmare. Especially in the densely populated area around Solo and Yogya. But driving between 5 and 7am was straightforward and refreshing, as the heat of the day hadn't yet set in. Of course her flight was a bit late, but I didn't mind waiting with a fresh pineapple juice in my hand.

She arrived smiling and after a warm hug we decided to visit the Buddhist temple of Borobudur, an important cultural heritage of central Java I hadn't yet managed to visit. After a short hour driving, we arrived at Mungkid, the village where Borobudur is located. Having seen Prambanan already, the Hindu temple complex close to Yogya, I was prepared to more of the same. But boy was I wrong! Yes, both temples have been built with the same type of volcanic stone from the flanks of Merapi and Merbabu. And yes, both temples are from cultures that were driven away from central Java a long time ago. But that's where the similarities end. While Prambanan is a temple complex with several temples devoted to different Hindu deities (Shiwa, Vishnu, Ganesh), Borobudur is a massive Buddhist temple with large stupas on top. And Borobudur has definitely a nicer background. The temple is located very close to a chain of lush green hills.

After the temple visit, we took a scenic route back to Solo, over a mountain pass called Ketep between the two active volcanoes Merbabu and Merapi. Once arrived at our home, Manu got a first introduction to Javanese food. We continued that kind of "education" in the evening and took her to a delicious local restaurant, Omah Lawas. As Lisa had to work the next morning, Manu and I started the day easily with some gym and relaxing at the pool afterwards. We picked up Lisa, had lunch and left for Yogyakarta, a drive that can take anywhere between 90 minutes and three hours. While driving, we suddenly realized that the brakes didn't work properly any more. So we went to a mechanic who quickly found the problem. We were completely out of breaking fluid! Luckily we have someone who is supposed to take care of the Jeep.

We arrived safely in Yogya and dropped our luggage at the guesthouse where we could stay thanks to a friend from Solo. Through some contacts she acquired working for the Swiss embassy, Manu knew a Swiss/Indonesian couple in Yogyakarta that invited us over for dinner. We spent an evening with a Swiss expat and his lovely wife, eating delicious food, drinking wine made in Bali and chatting about Indonesia and Switzerland.

The next morning, after a nice breakfast, we were keen to finally get to the beach. A two hour drive took us through Wonosari down to the south coast of central Java. As Lisa and I had been there before, we skipped the beaches at Baron and Kukup and headed directly to the much nicer stretches of sand at Drini and Krakal. We tried to find other beach accommodation, but in the end Sembodro cottages where we already staid in January was still the best choice. They have five rooms, but it would never come to my mind to make a reservation. Enough said about how remote this place is? We spent the afternoon swimming and walking along the beach. We sat on the beach to enjoy the sunset before heading out for some fish and shrimps. After that, we gazed astonished at all the stars we could see thanks to the missing light pollution. 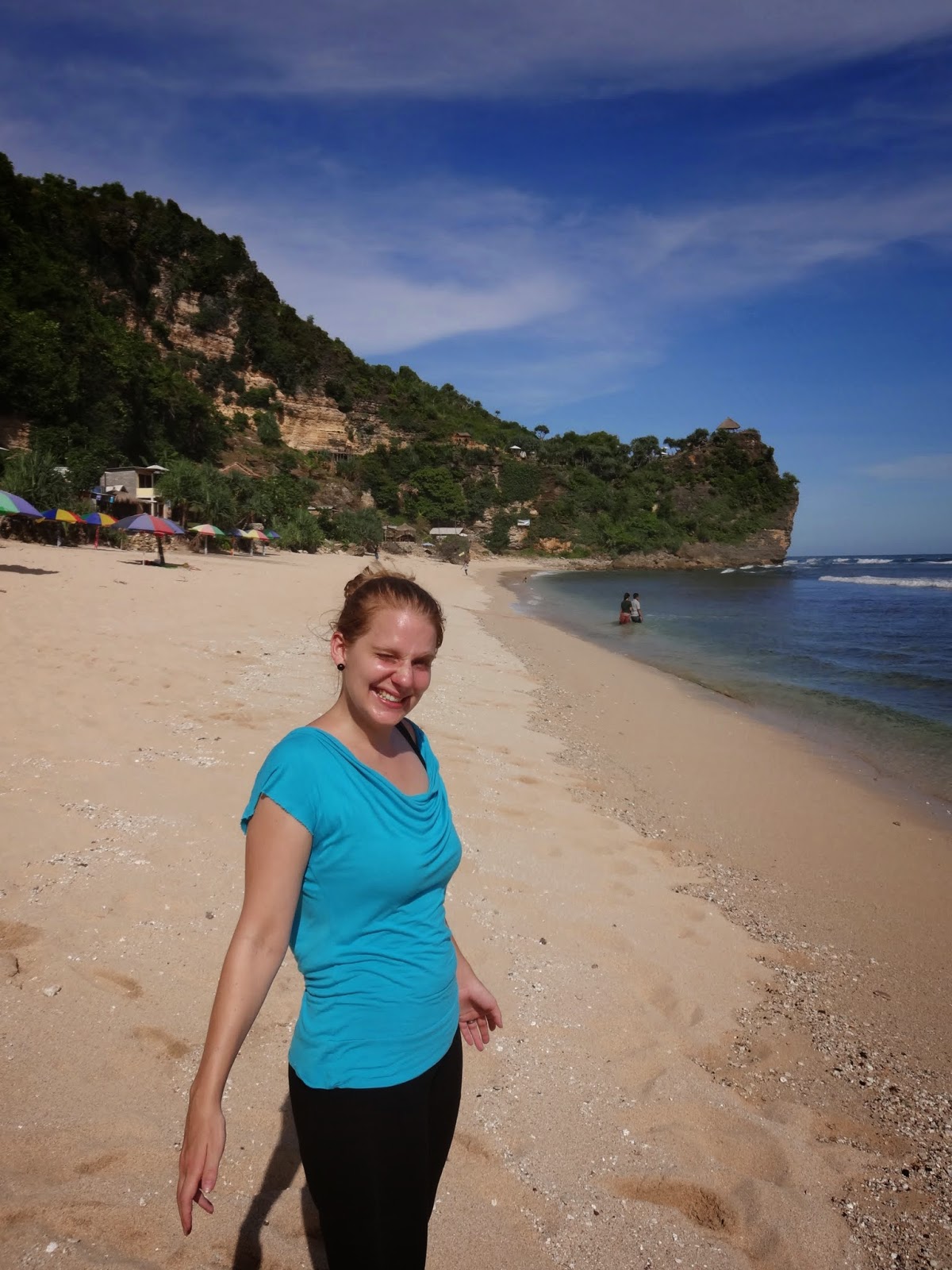 The next morning, we woke up with sunshine in our rooms. We enjoyed a relaxed morning swim and went for a late breakfast. In the afternoon, we decided to discover some more beaches along the coast. As the first couple of beaches didn't impress us too much, we finally went down a dirt track at a sign marked "Pantai Pok Tunggal" (pantai=beach). The track was rough and steep, but we trusted our more than 40 year old Jeep to bring us everywhere. In the end, we were rewarded with the cleanest beach so far and a very pristine stretch of yellow sand that hasn't seen many tourists so far. On the way back, we stopped at Indryanti beach for a sunset drink while Indonesian tourists jumped in the waves and posed on the sand. Another day in paradise.


Another day, another morning swim. Reluctantly, we packed our bags, but the prospect of what was waiting for us in Yogya lifted our mind. We replaced breakfast with some snacks we bought along the road and by lunchtime, we were back in Yogya. We walked down the main shopping road wondering who would buy all those things on display. While I settled in a bar for some juice, the girls got their nails done (Manu) or a massage (Lisa). We finished the day with a delicious pizza at Hani's, the best pizza in central Java we found so far. Sunday morning had us rise with the sun, as Manu's flight to Denpasar was scheduled early. After a breakfast at the airport, it was time to say goodbye. We don't know when the three of us will be able to meet again, as Lisa and I will keep travelling for a while and Manuela will be relocated to Abuja in June. Lisa and I area back in Solo now, missing Manu already, but also looking forward to our next friend(s) visiting us soon. Holidays in Indonesia: have you thought about it?