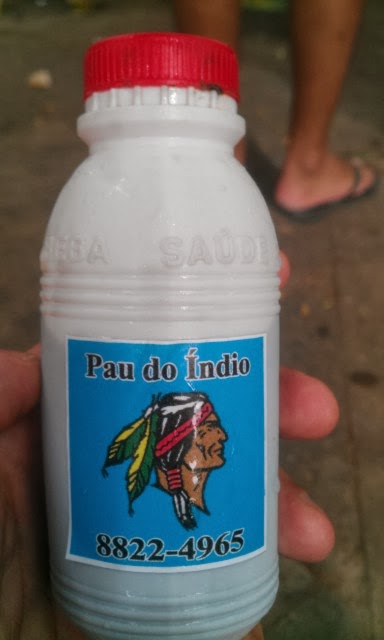 Food is an essential part of my travels. I love to discover foods unknown to my palate and acquire new tastes. A country as big as Brasil has of course a lot to offer. I'll focus here on foods found in the brasilian Northeast, including things to eat that can be found all over Brasil.

The basic staples of brasilian cuisine are without any doubt arroz (rice) and feijao (beans, either black or green). Accompanied with macarrao (spaghetti), salada (tomato-onion with vinegar) and frango (chicken) or carne (beef) this is the basics of brasilian food and is eaten once a day by a majority of the  population, mostly for lunch. A traditional dish that is often eaten on weekends as it takes longer to cook is feijoada (black beans with chunks of sausage, various types of beef and pork meat).
A great option for travellers are buffet restaurants, because you can actually choose what you want to eat and what you'd rather skip. Either the buffet will be sem balanca (open, meat might be limited to one or two pieces) or comida a kilo (pay by weight). The price is usually a quite good indication how sofisticated and varied a buffet will be. But if you stay a while in a place you'll find the gems rather quickly.

Some restaurants offer quite affordable "all you can eat" options, called rodizio. Don't try to venture to such a place if you're not really that hungry. Churrasco (grilled meat) is definitely the most popular, followed by pizza, pasta, surprisingly sushi, camarrao (shrimps) and caranguejo (crab).

With a coastline that stretches over thousands of kilometers from the border with Uruguay all the way up to the Guyanas, it's no wonder seafood plays a very prominent role in brasilian cuisine. Along the litoral, peixe (fish, usually grilled), camarrao (shrimps), caranguejo (crabs) and different kinds of shellfish are ubiquitous. Very delicious are also caldos, thick soups made from various ingredients such as camarrao, caranguejo, sururu (type of shellfish common around Bahia) and other fruits of the sea.

Most Brasilians enjoy to eat meat. A popular weekend activity with friends and family is thus churrasco (BBQ). A typical churrrasco will last all afternoon and stretch into the evening. Sticking to just one kind of meat is not really common. Usually a churrasco includes different cuts of beef, carne do sol (salted and sundried beef), chicken, sometimes wrapped in bacon, various types of sausages, possibly chicken hearts and maybe goat or sheep, though this is more common in the interior.

Snacks are - and this is no exageration - ubiquitous. On the beach, while waiting for the bus, sometimes even on the bus (thanks to ambulant vendors), with friends, or on your own. No situation would be perfect without a lanche (sandwich), a coxinha (mandioca dough filled with chicken, cheese or vegetables), a caldo do cana (sugar cane juice), pao de queijo (small bread filled with cheese) or any other snack.


If you like sweets, Brasil is your perfect destination. Sweet things are in general sweeter in South America. The soft drinks contain more sugar, chocolate is sweeter than most in Europe and some sweets are just simply made from sugar (rapadura). Bolo (cake) is often eaten already for breakfast and no one would eat a simple fruit salad without condensed milk (the very sweet type) on top. Most of my brasilian friends just shook their head when they saw that I didn't put any sweet topping on my ice cream.

One of the greatest things Brasil has to offer are it's vast amount of fruits unknown to anyone outside of Brasil. Thanks to globalization, we all get tropical fruits like pineapple, mango and pawpaw in the supermarket. Some brasilian fruits like Açai and Acerola are slowly being discovered by the Western public thanks to their health benefits. But what about Mangaba, Cajá, Cajú, Cupuaçu, Sapoti, Buriti, Graviola or Genipapu? If you spend some time in Brasil, make sure you'll try as many of them as you can. A whole new world will open up to you.

Unlike the uninitiated might think, brasilians don't drink Caipirinha all the time. Even though the occasional Caipirinha, Caipiroska (with Vodka instead of Cachaça) or Caipifruta (fruits instead of lime) is a nice thing to sip while watching the sunset on the beach,
beer is actually drunk way more often. Most beer you find in Brasil (and even more in the Northeast) is bland lager, usually consumed ice cold (gelado). Beer is usually shared, so it won't get warm until the bottle is done (at least in restaurants and bars, in clubs people tend to stick to "long neck"). If you're lucky, you might find some delicious beer specialties from southern Brasil. Wine is a tricky thing in northeastern Brasil. If imported from the south or from Argentina and Chile, it might be good, though I got disappointed quite a few times. The thing called vinho sold on the streets has not much to do with wine besides the name. It's better described as grape juice with additional sugar and alcohol. Cachaça is, in my opinion, a far safer bet, especially if you're in the interior (away from the coast) or the sertao (dry parts of the Northeast, even further from the coast).
Labels: Brasil