A road trip through the US of A - Part XII: coming to an end in Portland

One can not travel through the USA for three months and leave right before the 4th of July! So we gave our very best and did the full program. We were incredibly lucky that my sister knows a fantastic family in Portland! They invited us to spend Independence Day with them in their holiday house on the beach.

As we flew from Los Angeles to Portland we had to rent another car there. It is just so much easier to drive a car than to use public transport in the States. So we drove the two hours to our new home for the next few days: Neskowin. A little nest on one of the most beautiful beaches of the USA. And we lived on a little hill there, with the perfect view. We enjoyed the silence, as we knew that this would change very soon. People started decorating the town weeks ago, wherever you looked, it was all in red, white and blue!

It felt like in an american movie. People were happy chit-chatting on the beach and in their gardens, they were all welcoming and knew each other very well. The family we stayed with showed us around and we got the feeling to belong there. On 4th of July we lived through the full extreme of american patriotism. It was probably nothing, compared to other places. But for us, very unpatriotic swiss people it was impressive! People who go to Neskowin every year. Friends with each other for decades already. And we could be part of it, thanks to my sisters' friend and her fantastic family. They took very well care of us and shared everything they had, which was a lot! We totally fell in love with every single member of the family, including the hedgehog. 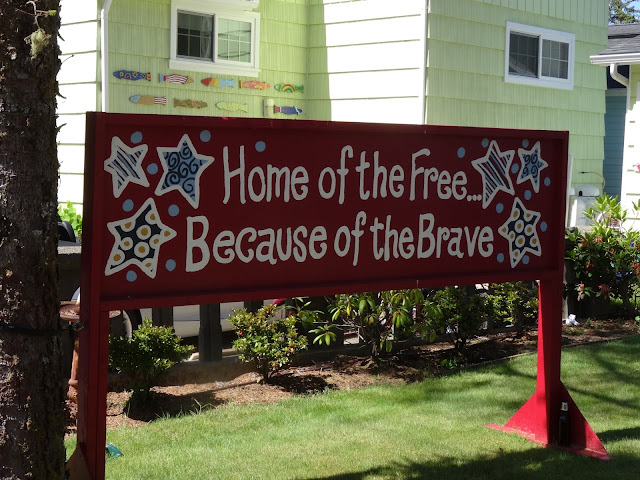 The parade was prepared and planned for a long time and people were dressed up as all kinds of people, things, stories and what ever else is important in the history of the US. We were in the middle of all the people when they sang all the songs, such as the National Anthem, This Land is Your Land, The Battle Hymn of the Republic and so on. It was amazing. All the songs we knew from the movies. They actually all knew them by heart! And then fighter jets that flew over our heads. It got quite scary when I imagined that they actually do shoot sometimes. Not like ours. But that is a different story. We were happy and very thankful that we got the chance to get this experience at this beautiful place. Another check on our list that was better than we'd ever dared to hope.

After the 4th of July we soon headed back to Portland, where we could stay a little longer with my sister's friend Sydney. She also showed us around in the city and took us to a great restaurant. Portland is different. The closest to Portland that we have seen in the US is Austin, Texas. Some people might hate me for saying that. But to me these two cities felt like oasis in the US. Hipsters everywhere, but also organic food, cotton bags, natural cloths, awareness of the environement (at least some) and a lot of craft beer. We felt very comfortable after the redneck spirit of "too much is not enough" in most of the other parts of the country. If you like beer and healthy food, go to Portland and have a blast!

More pictures from our time in Portland and on the Oregon coast
Labels: Los Angeles Neskowin Portland USA