A road trip through the US of A - Part IV: Washington, DC

When we checked who of our couchsurfing friends we could visit in the USA we were surprised that our friend from Ethiopia, whose couch we surfed in Addis Abeba already, moved to Washington D.C. recently. The capital of the United States, so kind of the capital of the world, right? We watched House of Cards before we went there, and we read stories and we visited important places and we listened to the stories people told about this place. In a nutshell, expectations were extremely high! 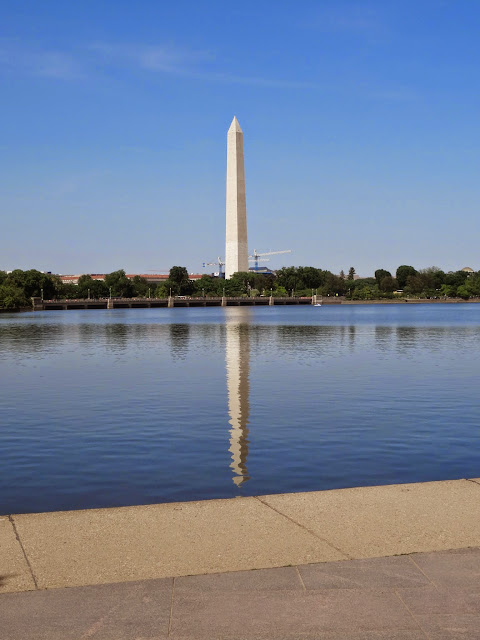 When we entered the city, we were wondering when the beautiful part would start, that was visible in all those movies. We got curious when we would reach the important part. But it didn't come. Somehow the streets had thousands of cracks, the infrastructure was in a horrible state and it was just a huge mess. Taxation without Representation. That's what the number plates of the local cars say. And it is not only that they have no representation but also no profit of the taxes they pay. But that is a complete story by itself. It was not at all the capital we imagined it to be. Finally we reached a roundabout and decided that this probably must be downtown, as our friend Luca wanted to meet us downtown, at that roundabout.

We had lunch together, which was a real pleasure. First because we got a bowl of fresh salad, a thing we haven't had in ages, but even more because we really missed our friends from home. Luca was one of them, so it was kind of like meeting family far away.

We were super happy and didn't mind the disappointment about the city too much when we finally decided to meet our Ethiopian friend who we thought would host us for a night or two. But when we finally found his address, he didn't show up, and he suddenly didn't answer any of our messages anymore. Until today we have no idea what has happened that day, but we had no choice but to sleep in our van on a Walmart parking lot. Again. This was a huge disappointment. We decided to hate that place, just because we could and decided to drive on first thing the next morning.

After a not too bad night on that Walmart parking lot - we were pros on that already and chose one a little outside in an upper class area - we drove downtown again, to do some sightseeing anyway. You can't leave Washington DC without a selfie with the white house behind you.

On our way we drove by the NRA, the National Rifle Association. First time I heard about it was probably in the movie "Bowling for Columbine" or one of the other movies Michael Moore made. After that for sure in "Thank you for smoking", one of my top favorite movies ever. And for sure you read enough about them in the newspapers. So we could not resist and had to go in there. To see it, but mainly to watch the people working there. As the museum was stil closed when we arrived, they invited us to have coffee in the canteen. Sure thing! And we were really impressed how friendly they all were, and how big the guns were, hanging on their belts, in the office, in the museum, in the canteen. And all the slogans on their cars, and all the images and stereotypes ... they matched perfectly, but still. They were awesome. And there were lots of guns and rifles in their museum. I saw my first real AK-47. I am not sure if that is good or not. Impressive it was for sure.

After that we needed to recover a bit but decided to go to a couple of other museums in the city, as they are free and well made. And then there are all those memorials, a huge area, very beautiful and impressive. And on the way we remembered that our former flatmate Edu from Brasil now lived in New York City but mentioned something about being in the capital these days. So we contacted him, met him and his friend for lunch and were happy again. But what made us even more happy and everything perfect was the invitation we spontaneously got to stay with him and his friend for a couple of nights. We agreed, as we missed Edu very much and his friend Marcio seemed just perfect for that moment. We agreed and spent a spectacular time with them in Washington DC.

And once again it became kind of obvious, that a great place to stay seriously changes the perspective on a place. As we could now discover the spectacular embassy area and the old town part by foot, we had perfect access to all the beautiful parts and didn't get stuck in traffic anymore. There is a lot to see and we enjoyed it all with warm and sunny weather. It was really a pleasure and we had a goooooood time.

Time passed by way too fast and it was soon time to leave. The way to New York City after that was less pleasant. Fabs hurt his foot really bad back in the south so that I had to drive all the time. That would not have been too bad, if the traffic was not as horrible. It took us nine hours to drive from Washington DC to NYC, instead of the usual four to five. Another lesson learned: never drive to a big city at the end of a weekend.