If you want to get a real Indonesian experience, we can highly recommend you to go to Karimunjawa - an Island group north of Java, paradise for all Indonesians. When Lisa came to Indonesia, she asked her local friends where she absolutely must go. Besides Bunaken, on top of the list they all mentioned Karimunjawa. Local travel agencies offer trips there that take between two and five days.

White beaches, forests, few people, not too touristy yet. But that might change soon. As the tour operators all offer tours from the port in Jepara and organize the accommodation on the island we decided not to book a tour but organize everything ourselves. Because the really difficult part is not the one the agencies offer to do for you: to find a safe and not too time consuming transport to Jepara. We were lucky to have a great host mum who let us use her old Taft, so we decided to drive ourselves to the port by car.

Together with Angela, our dear friend from Switzerland, we picked up Daria, Fabians friend from Germany at the airport in Semarang, which was on our way from Yogya to Jepara. On the map it looked as if the distance between Semarang and Jepara were short. Which is half true, but the streets on Java are crowded with cars, trucks, becaks, chickens, goats, children, motorcycles and everything else that can move, and driving fast is impossible. So we took it slow and arrived after darkness in Jepara. There we got the information that we could buy ferry tickets at 8am the next morning. Looking for a place to sleep, we stayed as close as possible to the port. After deciding that the rooms in the homestay were too expensive for what we would get, the owner suddenly showed us nicer rooms for the same price (200’000 IDR/ 13 EUR), with AC and a seat toilet for Daria and Angela, and with a traditional and moldy toilet, fan and no door lock for Fabian and Lisa for 100’000 IDR (6.5 EUR). We managed.

The next morning Fabs and Lisa went to the ATM in town (don’t forget to pick up money before you get to the port) to be prepared for the island. There is one ATM on the island now, but there is no guarantee at all that it works. Back at the port we were ready to jump for queuing as there seemed to be more people than tickets – again. But the information spread that the tickets would be available around 11am. So we waited, and some-when between 10-11am suddenly the counter opened, Fabs jumped in line, we were lucky and got four tickets for 110’000 IDR (7 EUR) each. Middle class, comfortable seats, AC, TV in front. After a two hours ride with quite heavy waves we arrived on Karimunjawa.

Most of the tourists got pick up service, we decided to walk, as the little town is very close to the port. The village obviously tries to adjust to the big amount of tourists coming, new homestays are built everywhere. We checked out about ten of them to make sure that we got the best option, as we were traveling with “guests”. But there is no beautiful beach front in the village, so we decided to take two pretty spacious rooms in Pelangi Karimun, with seat toilets, big double beds, shower and fan for 100’000 IDR (6.5 EUR) each. There are a few resorts on the island, which cost from 1.4 million IDR (90 EUR) per night, usually owned and managed by foreigners.

We first really wanted to support local business, as we always do. But the only restaurant on the island that does not belong to a resort was out of food after the first day (except for Nasi/Mie Goreng) and the service was terrible (the lady forgot our order and after three hours of waiting all we got was the food mentioned before, the second and third time we went there were not really better).

Karimunjawa depends on ships for supply of food and fuel. When the waves are too high, the people on the island run out of both very quickly. At least of supply for the tourists. We wanted to rent some motorbikes to discover the island, but the locals said there was no fuel left. Somehow there was enough fuel that they could still drive up and down the main road very slow, all day and night long, every day. Well, I guess they had their reasons… So we decided to discover the area around the village by foot. And not too far outside on the left side of the village (right if you're coming from the port) we found a lot of very nice hotels, beautiful lovely people, who were greeting us like we're used to from the Javanese people, and an incredibly beautiful resort.

Everybody recommended us to go to Nirvana Beach, belonging to the resort with the same name. But that costs 12’500 IDR (0.8 EUR) entrance fee, the beach is dirty and a cup of tea in the deserted restaurant costs 10’000 IDR (0.65 EUR), which is way too much. So we tried to find something else, and we did. The Brève Azurine Lagoon Retreat, an oasis in the middle of nowhere. If you eat or consume anything in the restaurant you get free beach access. The managing couple from New Zealand really cares about their guests, the food is a little pricey but really delicious and they have their own supply boat, so that you get what they write on the menu. A big relieve after we got the feeling that the villagers are not too happy with so many foreigners on the island.

We talked to some of the locals because we did not feel as welcome in the village as we usually did in Indonesia. And some of them told us that it is getting overcrowded with so many foreigners. Also the Karimunjawans are not trained in tourism and the infrastructure is not ready at all. We had no electricity for sometimes two nights in a row (there was none during the day anyway) and the atmosphere on the island was not too relaxed because there was no ferry for four days and no information about it at all. So all the tourists who had booked flights or further trips got nervous, annoyed and wrong rumors spread wildly. Fabs went to the harbor every morning to check if there is any information, on Saturday morning finally there were tickets for a ferry that was supposed to go that afternoon. 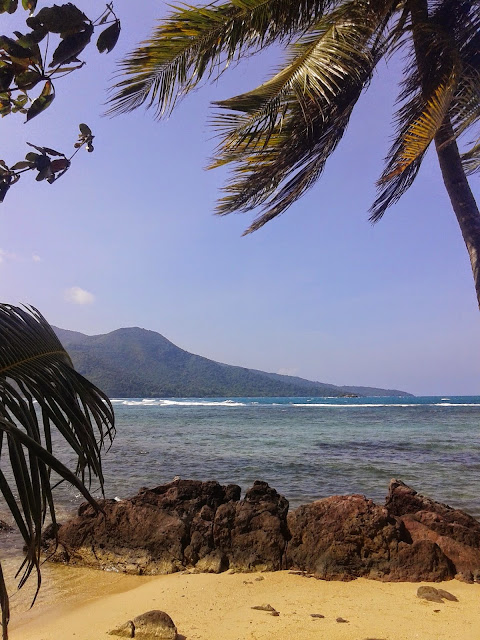 The training we got during our time in Indonesia finally paid off, we can wait even longer for things than the locals can. So Fabs and Lisa waited in front of the ferry office the entire morning, and were the first ones to get tickets when the sale started. We made it! And we could not believe that we finally really got tickets. Daria and Angela were even more happy, as Angela’s flight from Yogya was planned for Tuesday and Daria wanted to see more of Indonesia than Karimunjawa. As everybody just wanted to leave the island as soon as possible, many tourists already took some fishing boats to maybe catch their flights, but the ferry was still more than full. We squeezed in on the top, all the tickets were sold for 130’000 IDR (8.5 EUR), no categories, not enough space. But it was the only way to get back for us (with no idea when the next ferry would leave), as the flights from the Kura Kura Resort were all full the next week and cost about 2.5 million IDR (162 EUR).


There are some plans to improve the infrastructure and transport in the next couple of years, some of the Karimunjawans want to make it a real tourist paradise, but we are not really sure how this is going to turn out. As long as not all the locals want to live in a tourist destination and as long as tourists (or at least tour organizers) and locals do not find a good way to get along well, I am not sure whether that all makes sense. But I know that it is in Indonesia, and Indonesians always find a way to handle it. And that is why it is a paradise for Indonesians, maybe not yet for foreigners. But travelling Indonesian style means that you go with the flow, eat rice, sleep where there’s a bed and enjoy the beach without swimming. And that is what you get in Karimunjawa. So either deal with it or leave it. If you are ready to adjust, it can be paradise for you too.
Labels: Jepara Karimun Java Karimunjawa Semarang